Emotional Attachment to a House 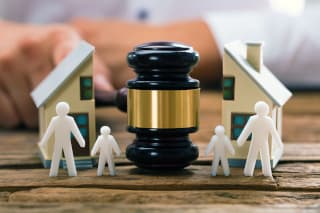 A house is just a building, but a home is filled with hopes, dreams, and memories.  The attachment to the home can be almost as strong as an attachment to a living being.  The attachment can be long-term – you’ve built a relationship with your home as you transformed it from simply a house to your home.  It isn’t unusual for people to sob as they sign the final documents relinquishing the home.

During a divorce, a client may want to keep the family home or may be relieved to have a fresh start.  It can be contentious when both parties want to keep the home, and it can be devastating if they realize that they can’t afford to.

For most children, their home has been their roots, their safe place, their sanctuary, and their security.  It has been their world: the divorce is felt like a loss of family and the loss of the home doubles that loss.  For some children, the home may have been filled with abuse, conflict, or violence.  These children (and their parents) may be relieved to have a fresh start.  Selling the home, especially under difficult circumstances such as a divorce, can feel like a death to some.  Grieving can take years.

It isn’t just in a divorce.  We see this attachment when we move an elderly parent out of the home they have been in for so long; the home has become an extension of themselves and leaving feels like an emotional amputation.  I have heard from many older people that they would prefer death to leaving their home.

The value of a home can’t be measured.  It is subjective and not quantifiable.  The appraised value may seem completely irrelevant because it doesn’t account for the emotional attachment.  The attachment may also be to the neighborhood, the community, which has become the modern-day version of our village as families have become so dispersed.  It is sometimes easier for people to relocate if they can stay in the same area.

Saying “goodbye” to the home is often skipped.  Children and adults can benefit from a ritual of some kind before the move.  The ritual can take many forms: planting a tree, taking photos, or simply holding hands together in a moment of silence.  One client put down a square of fresh cement outside and everyone put in their handprint!

Children leave home when they grow up.  While this might be hard, it is rarely traumatic.  They have had plenty of time to be prepared and to embrace the idea of moving on.  In a divorce, it is important to help children prepare for the move.  Parents should talk about it with their children ahead of time (not just the day before) and offer empathy for the loss as well as reassurance about the future.  Children can help with the move too, by visiting the new home, participating in designing their room, packing and unpacking their things.  Children can learn that change can be both a loss and an opportunity for growth and something new.

Nesting (or birdnesting) is a transitional option for parents.  It keeps the children in the home while the parents rotate on and off duty.  This is a time when parents can begin to prepare the children for the changes that are coming.  It is also a time when parents can be thoughtful about their decisions, including whether to stay in the home, sell it, or have one parent keep it.  Nesting is a kind of “softened startup” to the divorce, for the children and the parents. (More in my book, The Parent’s Guide to Birdnesting.)

When one parent keeps the family home, the children don’t lose that attachment.  However, it is rare for children to attach as deeply to the other parent’s new home.  That is why parents often argue over who gets to keep the home.  Sometimes clients will sell the home because it feels more “fair” that each moves to a new place.  Other times parents agree that they want the children to have the continuity of being with one parent in the family home.  Some say that home is where the parents are, and this is true to some degree.  But the attachment to the childhood home can’t be minimized.

During the divorce professionals should allow clients to talk about their emotional attachment as one factor in making decisions about whether to keep or sell the home.  It’s not simply about the money!